To share your memory on the wall of Estelle Jacqueline Jargello Novak, sign in using one of the following options:

Provide comfort for the family of Estelle Jacqueline Jargello Novak with a meaningful gesture of sympathy.

Women had not yet been given the right to vote when Estelle was born to Polish immigrant parents in Detroit.  Still, during World War II, Estelle helped blaze an inspiring path for women’s service in the military.

Eager to do her part, Estelle served as a member of the Women’s Home Defense and then enlisted in the Women’s Army Auxiliary Corps (WAAC) before it gained full status as the Women’s Army Corps (WAC) in 1943.  Estelle was one of 150,000 American women who served in the WAAC and WAC forces during World War II, the
first women, other than nurses, to serve in the Army (www.militarymemorialmuseum.com).

Estelle’s parents were proud of her decision and hung a blue star in their window, as was the custom for families with sons heading off to war.  Her mother put embroidered lace around their star to indicate it was their daughter who was serving.  (Estelle’s son, Jim, has written a song, “Blue Star in the Window,” to honor his mother: https://www.youtube.com/watch?v=1XBTONMq64M&t=1255s)

Estelle’s distinguished military career took her to the Pacific theatre in locations including New Guinea, the Philippines, Australia, and the Dutch Indies (now Indonesia).  General Douglas MacArthur called the
WAC “my best soldiers,” and his headquarters were in one of the buildings where Estelle worked.

Her assignment in New Guinea involved working with General George Kenney in Intelligence to track the movement of Japanese convoys in the region.  She was promoted to Sergeant and then Technical Sergeant with many commendations and ribbons for her excellent service.

Upon her return home to Michigan, she attended a stenotype commercial college on the GI bill, married and had three sons.  Her husband, Clarence, also a veteran, worked as an electrician at the Ford River Rouge Plant in Dearborn.  In the 1970s, their family moved to Ann Arbor, and Estelle worked as a secretary at the University of Michigan for many years.  She and Clarence were active at the Pittsfield Senior Center and especially enjoyed line dancing there.

In honor of Estelle’s 100th  birthday in June, an American flag was flown over the U.S. Army Women’s Museum at Fort Lee, Virginia, and sent to her in a frame as a keepsake.

A visitation will take place Saturday, February 8, 2020 from 9 am until the time of funeral service at 9:30 am at the CRC Towsley Village Memory Care Center, 805 W. Middle St., Chelsea, Michigan. Interment with Military Honors will take place at 12:30 pm at St. Hedwig Cemetery, Dearborn Heights. In lieu of flowers, donations may be made to the Chelsea Retirement Center, Life Enrichment department, 805 West Middle Street, Chelsea, MI.
Read Less

We encourage you to share your most beloved memories of Estelle Jacqueline Jargello Novak here, so that the family and other loved ones can always see it. You can upload cherished photographs, or share your favorite stories, and can even comment on those shared by others.

Posted Feb 08, 2020 at 09:08am
My thoughts are with Estelle’s family. It is so painful to lose someone, yet no one else can really know all that you feel except our Heavenly Father. He knows and feels your pain. He calls death an enemy and promises to remove it forever, Isaiah 25:8 “And he will swallow up death forever…” He also promised to wake up all our loved ones, in the memorial tombs, from death (Isaiah 26:19). What joy it will be to see our loved ones again and to enjoy life as our Creator purposed (Psalms 145:16). I  hope these words give all of you comfort.
Comment Share
Share via: 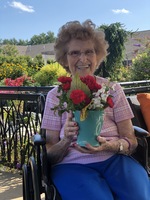