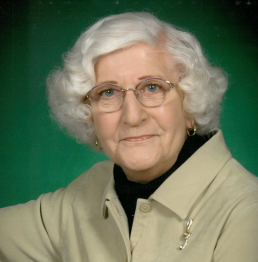 Esther Lillian Yost, age 97, died on June 4th at 1:30 a.m. Esther was the daughter of Killian and Matilda Metz of Louisville, Kentucky. She is survived by her two sons, Stephen (and wife, Marielle), of Gloucester, Massachusetts; Jon (and wife, Denise) of Ann Arbor, Michigan; six grandchildren: Nathan, Kerry, Jodie, and Jesse; Elise, and Stephanie; and two nephews and one niece.

Esther Yost graduated from the University of Louisville in 1945 and from Juilliard School of Music, New York, in 1949, majoring in vocal music. She was a member of the original Robert Shaw Chorale, touring and recording with this group. After leaving New York, she was Instructor of Voice at Oberlin College Conservatory of Music, Oberlin, Ohio. There she met and married Don A. Yost in 1952. She continued using her vocal talents and supportive ministry in the three churches where her husband was pastor.

She sang in many churches, gave recitals, and after moving to Ann Arbor in 1968 sang for many years with the Ann Arbor Cantata Singers. She attended Eastern Michigan University, earning her Michigan teaching certificate. She was a teacher of vocal music and preschool in the Head Start program in Willow Run Community Schools for 19 years.

In 1999 Esther was honored for her 30 years of service as Choir Director at Northside Community Church where her husband was Pastor Emeritus. Esther taught adult and children's Sunday School classes, Bible study, and was part of the ministry of community meals at First Baptist Church for 15 years.

Esther's greatest joys were her family, growing in Christian faith with her church family, singing, and choir directing.

In lieu of flowers, memorial contributions may be made to Northside Community Church, 929 Barton Drive, Ann Arbor, MI 48105.