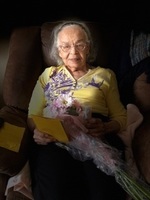 Iva Lillian (Jewett) O’Neal, age 91, made her transition peacefully at the Evangelical Home in Saline, Michigan, on September 12, 2020 with her daughter (Cheryl) at her side.

Born on December 4, 1928 in Ann Arbor, Michigan, she was the daughter of Richard and Iva (Dean) Jewett. Iva lived in her beloved city all of her life. She enjoyed traveling in her latter years, and especially enjoyed taking numerous trips with her older sister Ruth. She loved music and loved to dance. She had a zest for life and enjoyed talking to people.

Early on, she worked at the University of Michigan Hospital as a ward clerk/secretary and also in the Preemie unit. Later in life she worked with the Ann Arbor Public Schools as an assistant teacher aide, the Student-Parent Center as a caregiver for infants and children, as well as with the Foster Grandparent Program.

She was preceded in death by her husband, William J. “Rocky” O’Neal and sons, Richard Mark O’Neal and Stanley R. Jacobs, as well as her parents, Iva May (Dean) and Richard P. “Dick” Jewett, her sister, Ruth (Jackson), and brother, Coleman Jewett.