To share your memory on the wall of James B. McConville, sign in using one of the following options:

Provide comfort for the family of James B. McConville with a meaningful gesture of sympathy.

In addition to being an accomplished engineer and author, Jim was a loving father and husband, a rugby player, a philosopher, a teacher and an artist. Perhaps his most remarkable achievement was managing these roles with an earnest humility, which cracked only subtly if conversation stumbled upon his esoteric passions.
Jim was born in Spartanburg, South Carolina, on February 12, 1944 to Wanda L. McConville (nee Flanders) and Major John B. McConville, an infantry officer in WWII who died unexpectedly when Jim was a teenager. The moral and physical courage of his father during that war left a lasting impact on Jim, who carried a zeal for WWII history all of his life.

Jim spent most of his childhood in upstate New York and graduated from Rye High School in 1961. He studied Aeronautical Engineering and German at the University of Virginia until 1966. He credited his work under the auspices of Dr. Walter Heilbronner (a German Jew who narrowly escaped the holocaust) and Dr. William Zuk as playing a pivotal role in his life. After graduating from UVA, he took a job with the Lockheed Corporation in Marietta, Georgia. It was there that he stumbled upon another hobby, Rugby, and became a member of the Atlanta Rugby Football Club.

Jim’s time in Georgia allowed him to nurture his penchant for languages with the pursuit of a Master’s degree in Language Education from the University of Georgia. His studies were succeeded by work with Clark Equipment Company, Ingersoll Rand, and Mechanical Dynamics (now MSC Software). Jim’s tenure at Mechanical Dynamics/MSC was the highlight of his professional career. He spoke enthusiastically about his colleagues until the day he died. For Jim’s work in developing technical models and methods as well as his mentoring and inspiring of colleagues and customers alike, MSC recognized him with a Technical Fellowship in 2014.

Jim’s stint with Clark Equipment company in the late 70s brought him to Battle Creek where he happened upon one particular Mary Elizabeth “Liz” Dowdle. Liz and Jim were married 26 April, 1980. He often remarked that meeting Liz was the best thing that ever happened to him, and that he not only fell in love with her, but with her entire family.

With his background, it should not be surprising that Jim was at ease discussing theoretical physics, philosophy, engineering, and World War II but that small talk was not his forte, so he often resorted to a collection of endearing one-liners, most notably,
“Go get ‘em, tiger!”

It was difficult to watch Jim suffer in the later part of his life, but this was assuaged in part by the caretakers who loved Jim as if he were their own (and partook in his engineering projects as he dictated instructions). He considered himself fortunate to bask in the warmth and affection of the family and friends who came together to support him to the very end.

Jim is survived by his wife, Mary E. McConville; his son, Maj Sean C. McConville (USAF); his daughter, Katherine M. McConville and her fiancé, Michigan State Trooper, Frank Tafralian; and many beloved in-laws, cousins, nieces and nephews. He was preceded in death by his parents; and his brother, John F. McConville. Cremation has taken place. A memorial service will be held Saturday, January 18, 2020 at 10:00 AM with a memorial gathering beforehand at 9:00 AM at St. Mary Student Parish; 331 Thompson St., Ann Arbor, MI 48104 (Parking available next-door in the city parking structure, payment required).
Read Less

To send flowers in memory of James B. McConville, please visit our Heartfelt Sympathies Store.

We encourage you to share your most beloved memories of James B. McConville here, so that the family and other loved ones can always see it. You can upload cherished photographs, or share your favorite stories, and can even comment on those shared by others.

Tony, Jacqui, Axel and OP, Martin Olsson (MDI/MSC), and others have sent flowers to the family of James B. McConville.
Show you care by sending flowers

Guaranteed hand delivery by a local florist
TO

Posted Jan 17, 2020 at 10:31am
Please accept our most heartfelt sympathies for your loss. May the memories you share bring you comfort in this difficult time. With love,

Tony, Jacqui, Axel and OP purchased flowers for the family of James B. McConville. Send Flowers

Posted Jan 16, 2020 at 09:41pm
Please accept our most heartfelt sympathies for your loss... Our thoughts are with you and your family during this difficult time.

Posted Jan 16, 2020 at 02:14pm
Jim was a truly unique human and I’m happy to have known him! For a kid who didn’t much care for most adults, it says a lot of him that I liked him very much and always enjoyed his presence, his one-liners, his unique interests and talents, and even his pretty darn amusing way of laying down the law with the kids (including and especially my childhood best-friend, Sean!). Best wishes for peace to him and the whole family.
Comment Share
Share via:
MM

Much love, Lisa and Matt Mansell

Posted Jan 16, 2020 at 01:14pm
We'd like to extend our heartfelt sympathy as you mourn the loss of this great man. What an impact he's made to all who were lucky enough to know him!

Much love, Lisa and Matt Mansell purchased flowers and planted a memorial tree for the family of James B. McConville. Send Flowers 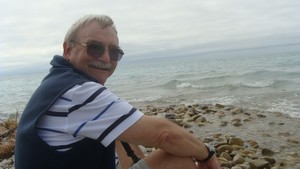