To share your memory on the wall of James "Jim" Stephen Reece, sign in using one of the following options:

Jim was born in Payson, Utah, to James Sterling and Nelda (nee Snelson) Reece. The family moved to Denver when Jim was two, and he attended public schools there, graduatin... Read More
James passed away on Sunday, December 15, 2019, at the age of 77.

Jim was born in Payson, Utah, to James Sterling and Nelda (nee Snelson) Reece. The family moved to Denver when Jim was two, and he attended public schools there, graduating from East High School in 1960. He did his undergraduate work at Yale University before earning master’s and doctoral degrees from Harvard Business School. He taught at HBS from 1970 until 1975 and then at the University of Michigan Ross School of Business until his retirement in 2007. He was the co-author of several best-selling accounting textbooks.

Jim served for many years as a trustee of the Ann Arbor Summer Festival, including a term as Board Chair, and later as a member of the Finance Committee. He was an active member of the Rotary Club of Ann Arbor following his retirement. He was also an avid U of M sports fan.

We encourage you to share your most beloved memories of James "Jim" Stephen Reece here, so that the family and other loved ones can always see it. You can upload cherished photographs, or share your favorite stories, and can even comment on those shared by others.

The Talbot and Kinnear Families

The Talbot and Kinnear Families purchased the Peaceful White Lilies Basket for the family of James "Jim" Stephen Reece. 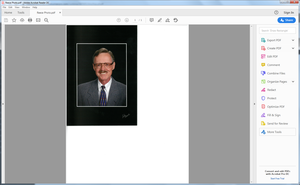