To share your memory on the wall of James Splitt, sign in using one of the following options:

Jim was born in Ann Arbor, on August 2, 1933 to parents Merrell Frederick and Phylis Frances (Goetz) Splitt and raised with his siblings, Phil and Diane . After graduating from Ann Arbor High School, Jim enlisted in the United States Army. In 1953, just before being deployed to Korea, Jim married his childhood sweetheart, Margaret Suma. Upon his return home, he began working at Varsity Laundry and worked his way into a management role. He worked for Varsity Laundry for eighteen years. In 1973, he and Margaret purchased Gold Bond Cleaners in downtown Ann Arbor and operated it together as a family business. Jim enjoyed going to work every day, working with his employees and serving his customers.

Jim enjoyed being active throughout his life. He was an enthusiastic fastpitch softball player and played for

several local teams and spent many years enjoying the sights and sounds of nature while on hunting and fishing trips. Jim was a member of Ducks Unlimited and was very active in the Ann Arbor Jaycees. He spent the last of his retirement years living in his cottage on Gallagher Lake.

He was preceded in death by his parents, Merrell Frederick and Phylis Frances Splitt; and his wife of 62 wonderful year, Margaret Suma Splitt.

Private cremation services have taken place. Memorial contributions may be made to Arbor Hospice.
Read Less

To send flowers to the family or plant a tree in memory of James Frederick Splitt, please visit our Heartfelt Sympathies Store.

Receive notifications about information and event scheduling for James

We encourage you to share your most beloved memories of James here, so that the family and other loved ones can always see it. You can upload cherished photographs, or share your favorite stories, and can even comment on those shared by others.

Posted Apr 27, 2020 at 12:27pm
We moved in next door to the Splitts in the summer of 1969. Jim and John were working hard on John's soapbox derby car. At the age of 7, that was about the coolest thing a neighbor could be working on, so I was in that garage a lot. Jim took the time to answer all questions from me about how the car worked. And that was the way it was - Jim and Margaret and the kids were always doing fun things, and always shared whatever they had. We played a TON of basketball in their driveway, never a complaint. Margaret, however, wasn't above spraying us with her kitchen sink hose, accompanied with a hearty laugh. You can't ask for better neighbors, and as I think back, I think it has inspired me to always be a good neighbor, because it is so much fun and a great part of life.

So thanks Jim - you were sure one of the good ones. And to John and Carole - all my best to you. 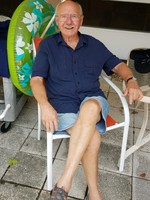