To share your memory on the wall of Larry R. Crockett, sign in using one of the following options:

Provide comfort for the family of Larry R. Crockett with a meaningful gesture of sympathy.

Mack, his brother and wise life-long counselor, was best man at Larry and Kathy’s wedding in 1983. On this occasion, in recognition of their appreciation for their families, Larry and Kathy exchanged each other's last names for new middle names. Larry adored Kathy's parents and sisters. He was delighted when his special nephew Greg Markley discovered a family genealogical connection to the legendary Davy Crockett. Larry was very proud of his family and blessed with many friends, including special childhood friends Moore and Klute.

Larry received a B.A. with honors from Wichita State University, an MBA from the University of Detroit, and attended the University of Michigan Law School. He joined the First Unitarian Universalist Church in Wichita, Kansas in 1953 and remained a member in spirit until his death. He served in the United States Air Force for ten years with three years of active duty and seven years in the reserves, and was honorably discharged as a captain.

He worked for Boeing, Ford, Bendix, and Communications Satellite Corp. The last 30 years of his career were at The University of Michigan where, with the special help of his friend Marian Krzyzowski, he started a new division, BIAD (Business and Industrial Assistance Division) at U-M's Business School. Larry was overjoyed when dear Jack Edelstein, who had worked with and for him for some 20 years, dedicated his doctoral dissertation to him. And it was a special joy to watch Jack and Eileen's children, Jesse and Ella, grow.

Larry was an extremely kind, generous, thoughtful, outgoing man, with a positive view of life. He was an avid reader and a devoted supporter of the public library, which he referred to as “The Club.” Larry learned T.M. in the ‘60s and never revealed his mantra to his wife. He loved trees, clouds, pies, Michigan football, skiing, good company, truth and justice. In his youth he had aspired to be a lawyer of the underrepresented.

Larry had a lifelong interest in assisting the African American community to prosper economically and with the guidance of his friend, Wallace Williams, founded the Minority Technology Council of Michigan. He was a life member of the NAACP.

He was twice elected president of the National Association of Management and Technical Assistance Centers, an association of some 160 universities.

He took great pride in his role as co-chair and vice president of the Ann Arbor Holocaust Memorial Foundation and was deeply involved in the placement of a Holocaust memorial at The University of Michigan, the first such memorial at a public university. In 2002 he was nominated by Michael Brooks, a friend of many years, to the Governing Board of the University of Michigan’s Hillel. As the first gentile so honored, he was elected and re-elected six times to serve on Hillel's board. Larry had always felt a strong affinity for the Jewish people, but did not want to convert as “it was just too complicated!” He was delighted when his DNA test revealed a 16% Jewish heritage.

He served for over 30 years on the boards of the Michigan Lupus and National Lupus Foundations. His interest in Lupus was sparked by his sister Eva’s struggle and death from Lupus. He was also an active member of Ann Arbor's
Rotary Club North for many years.

A Celebration of Life will be conducted at Nie Funeral Home, 3767 W. Liberty Street in Ann Arbor, MI, on February 22, with visitation at 10:00 a.m. followed by a service at 11:00 a.m. Following cremation Larry's ashes are to be spread in the Glenn Miller Park in Richmond, Indiana, where he spent so many days of youthful fun and adventure with his dog Ted, his brothers, and friends.

In lieu of flowers, memorial contributions may be made to the Huron Valley Humane Society, 3100 Cherry Hill Road, Ann Arbor, MI 48105, to your local public library, or to a favorite charity of your choice.

Blessings to all.
Read Less

We encourage you to share your most beloved memories of Larry R. Crockett here, so that the family and other loved ones can always see it. You can upload cherished photographs, or share your favorite stories, and can even comment on those shared by others. 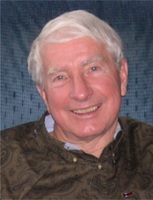