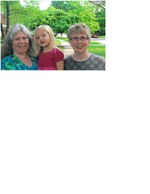 Mary was born in 1937 in Berkeley, CA to Herbert and Mildred (Earley) Conrad. Mary grew up primarily in Princeton NJ, later moving to Maryland and then Washington D.C. where she graduated from Woodrow Wilson High School. She graduated from Penn State University with a degree in Recreation; she loved camping. Part of an internship for her degree brought her to Mill Lake, MI where she met Bill. They were married in 1959 and settled in Ann Arbor. She first worked teaching at Perry Nursery School before starting their family. Later she went back to work as a technical typist for the Chemistry Department at U of M.

Mary was a 60 year member of the Church of the Good Shepherd (COGS) and was very active in the community and social justice issues throughout her time in Ann Arbor. She was a Girl Scout leader for many years, and then was involved in many community groups. Some of these were related to Fetal Alcohol Spectrum Disorder, racial and economic justice (through Interfaith Council for Peace and Justice, ICPJ), affordable housing (through Religious Action for Affordable Housing, RAAH) and received their award in 2019, prison reform and restorative justice (through Friends of Restorative Justice, FORJ), and mental health (through Project Transition). Mary also helped with adoption groups such as Columbian American Friends and Spalding for Children, the CROP Walk, and the Remember Program at Pine Ridge Reservation and Civil Rights. She was also a COGS 2009 MLK Day Award Recipient.

Mary was a huge reader, belonging to two groups she cherished and she enjoyed gardening, traveling, folk dancing, and singing in the church choir. She was involved in a dinner party group through the previously known AAPS Faculty Wives Group and she swam with the Dawn Ducks, including the MI Masters Swim Meets later in life.

She is survived by her children, Lois (Mike) Kinch, Jean (John) Adams, Bruce, Ben and Roberto Browning; grandchildren, Kila (Ryne), Jake (Claire), Sophie (Trace), Claire, Lily; and two great-granddaughters, Morgan and Devin. She was preceded in death by her husband of 59 years, Bill, in 2018; her parents; her sister, Alice; her niece, Laurie; and many in-laws.

Memorial contributions may be made to Church of the Good Shepherd; 2145 Independence Blvd, Ann Arbor, MI 48014.