To share your memory on the wall of Victor Walbridge, sign in using one of the following options:

Print
Victor Edward Walbridge left the world the evening of February 10, 2020, at the age of 47.

He also left behind an apparently endless chosen family comprised of friends new and old, past and current loves, enamored acquaintances, hangers-on, enemies, and confused on-lookers dazed by the exuberance and often times dark humor of what was undoubtedly the smartest guy in the room.

During his time here he had been an armchair historian, father, actor, musician, husband, foil, teacher, inspiration, boogeyman, life-long student, lawyer, writer (winning two Hopwood writing awards, only tying but not beating the record set by Arthur Miller, a fact with which he was never satisfactory resigned to), and friend to multitudes.

He made many mistakes. He did wrong. He enlightened. He taught. He was a lover of attention who never failed to focus his complete and total attention on a friend in need.

In the end he was a riddle wrapped in a mystery, inside a worn leather jacket, that was also an enigma.

Victor took his own life after a lifelong battle with depression and PTSD. He stayed with us as long as he could. He will not, and can not, be forgotten.

A visitation will take place Saturday, February 15, 2020 from 11 am until time of funeral service at 1 pm at the Nie Family Funeral Home, 2400 Carpenter Rd., Ann Arbor. Interment will take place at the LeLand Cemetery, Ann Arbor, Michigan. A potluck wake will follow at the farmhouse. A Memorial fund has been established for those wishing to make a memorial contribution in Victor's memory. Please visit https://www.integrativeempowerment.com/donations for more information.
Read Less

To plant a memorial tree in honor of Victor Walbridge, please visit our Heartfelt Sympathies Store.

We encourage you to share your most beloved memories of Victor Walbridge here, so that the family and other loved ones can always see it. You can upload cherished photographs, or share your favorite stories, and can even comment on those shared by others.

Posted Feb 15, 2020 at 11:33am
Susie, I am Victors cousin and I live in Tennessee. You and I have never met face to face. The last time my sister jeanne and I visited you were working. We had a great visit in Victor. He was in the middle of law school at that time, before the cancer hit. He was such a lively man, he made us laugh and wonder at his brilliant mind. He also took on the job of finding my Grandmother Christie's death certificate for me so I could find out when she died and where she was buried. I was so grateful for this. He gave new life to Aunt Flo's grandfather wall clock. Aunt Flo said it wasn't working, but it put it back together and gave the pendulum a push, and away it went.

I know how depression saps life out of you, but he fought so bravely. Our prayers and tears are with you as you go about setting a new "norm" in your life. Victor will be forever in our hearts and memories.
Love Christine Byrer, Tennessee
Comment Share
Share via:
LW

Posted Feb 15, 2020 at 10:57am
Mickey, marge, Kim, lily our hearts go out to you. We got the information Friday and funeral is today, we are in Florida and there was no way to meme
It back. Victor, like so many of us suffered his own battles (myself included) he was very brave
To continue on
Comment Share
Share via:
HS

Posted Feb 14, 2020 at 06:56pm
Dearest Family - Sending you love and hugs from afar as we remember Victor today. Know that you are in our hearts and minds today and always.

Posted Feb 14, 2020 at 06:31pm
I worked with Victor at Black River in my first year teaching there back in 2006. Victor was a bright mind that had a lot of compassion. He would dress up in a fancy suit Monday-Thursday and then often dress up as silly as could be on casual Fridays or on spirit week. He had a lot of talent and started a Forensics Club for students to act, perform, and do other oratory competitions. He put a lot of effort into it. I saw him go out of his way to help a student with depression.

An embarrassing story for me is one that I remember most about Victor. My grandmother had died and I felt very sad, but I couldn't cry at the funeral. Everyone was crying, but me and I wanted to cry, but couldn't. I felt as if there was something wrong with me. Awhile later my pet cat of 18 years died...then at work the next day I thought of my dead cat and how I didn't cry at my grandmother's funeral and finally cried for my grandmother. Some people at work acted like I was weird to cry at work. Not Victor. He came over and put his arm on me and asked me what was wrong. He told me it wasn't weird to cry for my grandmother when my cat died and that he had once cried when a car he loved died. He made me feel better. Victor was a good compassionate person.
Comment Share
Share via: 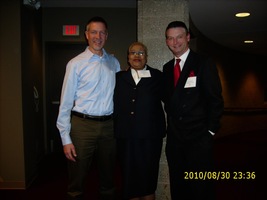